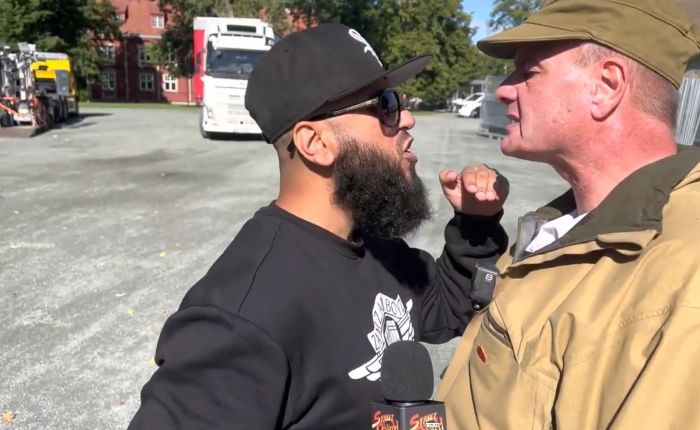 Islam Net is a jihadi group that seeks to implement the political system invented by Mohammad, in Norway. At this stage of the jihad process, they are doing so by telling lies about islam to those the quran labels as filthy infidels.

Based on Western ethics it is an undisputed fact that islam and Islam Net are evil.

The quran and sharia agrees that the ethics of islam is the opposite of western ethics. Therefore, anyone who seeks to replace civilized western ethics with the barbaric islamic ethics must be at least deported asap.

Muslims claim – correctly – that islam is “a complete way of life”. Such a political/religious system is not compatible with secular democracy and must therefore be removed from civilized countries, before it turns them into islamic hellholes similar to the more than 50 nations that already are invaded and occupied by islam.

On Aug 22, 2022 Islam Net brought the pakistani jihadi “SQ” to Norway to show the world that such people do not fit into a civilized society.

SQ came from USA, where he resides as an uninvited guest, spending his time making Youtube videos, promoting the ideology that seeks to abolish his host nation.

While the Islam Net leader Fahad Qureshi after his change of strategy a few years ago, now tries to appear civilized and limits his verbal jihad to lies and distortions, SQ acted as a pre- homo sapiens creature during the chat we had by the cathedral Nidarosdomen.

SQ probably thinks this is the best way to convince his audience that his ideology is superior to civilized ways of life.

The apparently good muslim SQ does his best to copy the behavior of the primitive barbaric caveman Mohammad – the guy who invented islam.

SQ does so by lying, distorting, and jumping around in an ape-like manner, bullying and threatening islamic style.

The rude uncivilized appearance of SQ in this video, is a pathetic attempt to draw attention away from the facts that islam is an evil political ideology, with no golden rule, no humanity, and with an ethical system that is opposite to civilized western ethics.

The suppression techniques SQ uses in this conversation, are kinds of manipulation that probably are easy to accept by people who have a religious prohibition against free and critical thinking.

However, non-muslims with a functioning brain will consider this behavior as pathetic.

Constantly interrupting your civilized counterpart does not mean you won the debate, SQ.

Quite contrary, it proves that you are aware of the fact that SIAN is telling the unpleasant truth about islam.

Our full recording is HERE.

This video is published to counter any editing / falsification of SQ’s own recording of our honest attempt to debate a complete moron.

The way SQ appears is not at all surprising. He is a good muslim, which means he is a bad person due to the fact that he seeks to copy the deeds of Mohammad.

The self-proclaimed prophet had no interest in debating. He knew his religion was crap. He knew he was a false prophet. Therefor he did not argue. He threatened. And later, when he gained power by slaughtering and plundering non-muslims, he assassinated and executed political opponents and critics, according to sira (Ibn Ishaq Sirat Rasul Allah).

Islam Net is not there - yet. Islam is not strong enough in Norway today, to impose the islamic doctrines of manslaughter. They have to limit themselves to lies and distortions a few more years, as their false prophet did in 610-622.